Queensland first home buyers are being given an extra boost by AVJennings to get into a new home faster.

In addition to the Federal Government's initiative to allow first home buyers to use their superannuation accounts to boost their deposit savings, AVJennings has created a way to fast track buying a new home for first time or entry level purchasers.

AVJennings has introduced an initiative which allows first home buyers to save their deposit while their property is being built, allowing them to get into the market sooner with as little as $1,000 up front.

AVJennings Queensland General Manager Tony Creighton said many first home buyers were not aware that they did not need to wait to save their full deposit before making a purchase.

"The Federal Government's first home saver initiative will work hand in hand with AVJennings' 'save while we build' offer," Mr Creighton said.

"Our scheme allows buyers to make an initial $1,000 payment and we then work with them to create a savings plan to raise the balance of the deposit required while their new home is being built. From July 1, buyers will be able to deposit funds as additional voluntary contributions into their superannuation account to receive tax breaks and accelerate their savings.

"Buyers can even use the State Government's $20,000 first home owner grant, which will be reduced to $15,000 after June 30, as a starting point for their deposit.

"The message to Queensland first home buyers is that they can access several initiatives to help them get into the market, especially if they want to take advantage of current record low interest rates, which are expected to rise over the coming years."

New home owners Shane and Berenice Fortuin are two of the latest purchasers to take advantage of AVJennings' 'save while we build' scheme.

The Fortuins are among the first residents at AVJennings' new Parkside community in Bethania, which boasts two and three bedroom townhomes close to parks, schools, transport and a convenience shopping centre selling from just $299,900. 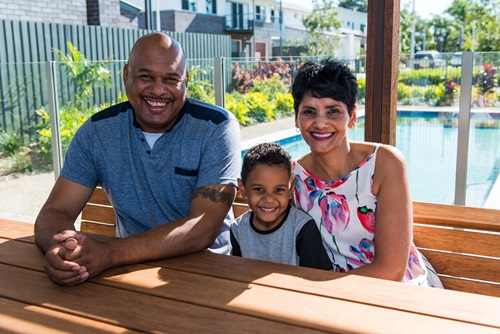 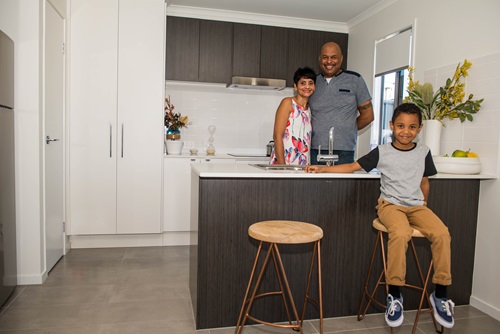 Mr Fortuin says the 'save while we build' scheme allowed his family to step into their new home sooner.

"It was a simple process because we knew exactly how much we needed to save each week to meet our target, and we didn't have to stress about missing out on the home we wanted," he said.

"We saved approximately $300 per week over about a five month period and, combined with the first home owners' grant, we had enough for a deposit on our new home, which we moved into about a month ago.

"We decided it was better value to save and purchase our own brand new home instead of renting an older, existing home for around the same amount as our mortgage repayments.

"We're really impressed with the quality of Parkside Bethania -  it has a great residents' area including a pool and barbeque terrace and it's close to my son's school and local parks.

"It was a good move to get into the market when we did and other first home buyers can do their same, if they do a bit of research into the options available to them," Mr Fortuin said.